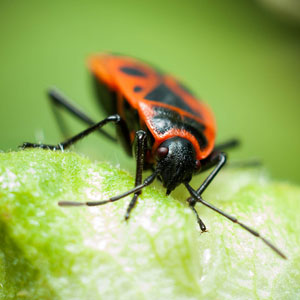 The boxelder bug (Boisea trivittata) is a North American species of true bug. It is found primarily on boxelder trees, as well as maple and ash trees.

These highly specialized insects feed almost exclusively on the seeds of Acer species. The boxelder bug is sometimes confused with Jadera spp., or its western counterpart, Boisea rubrolineata. The name “stink bug,” which is more regularly applied to the family Pentatomidae, is sometimes erroneously used to refer to Boisea trivittata. Instead, these insects belong to the family Rhopalidae, the so-called “scentless plant bugs”. However, boxelder bugs are redolent and will release a pungent and bad-tasting compound upon being disturbed to discourage predation. This allows them to form conspicuous aggregations without being preyed on.